In November, the Orange County Board of Supervisors, of California, unanimously approved a year-round homeless shelter to be built in Anaheim. This was after 600 supporters and opponents who gathered at the forum at Eastside Christian Church.

Their vote came four hours after heated debate over whether or not the warehouse should be converted into a 200 bed facility for the homeless. The facility is located off the 91 freeway, and is on 1000 N. Kraemer Place in an industrialized part of Anaheim.

Those that were against opening of the facility were business owners that surround the area, as well as residents from nearby neighborhoods. Their argument against opening a year-round homeless shelter is it will only lead to more crime and become “a magnet to additional homeless in the area,” said Mike Chew, who is a nearby resident who lives a mile away from the facility. 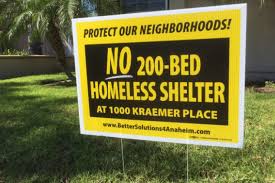 The opponents also fear that once this location is open that it will deter customers from shopping at their stores. The residents in the nearby neighborhoods fear that the homeless shelter will lower their value of their home.

Those that were in favor of opening a year-round homeless shelter included advocacy groups, charities, and churches.

One of the supporters was Curtis Gamble, who, as the O.C. Register reports, was homeless for six years, told the forum, “It’s time we help the veterans. We served the country, we looked out for you. It’s time to look out for us.”

With the shelter approved, board Chairman Todd Spitzer was reported saying, “If we do it here and we do it right and we dispel all the myths, we can do this and we can solve the homeless problem in our county.”

The 200 bed homeless shelter will be, “equipped with a multiservice center that would assist occupants with health, employment, housing and other services.” Shuttles will be available to transfer people to and from the shelter to jobs and appointments. Homeless clients who have pet dogs will also be able to keep their pets in kennels and be able to play with them in a dog park that is located on the facility. The shelter will also offer a bike repair station, as was reported Scpr.org. It will also help people find permanent housing and permanent employment.

The shelter will be able to provide, “122 beds for men, 64 beds for women with an additional, separate wing for families. Cots, mats and cribs would be used for overflow.” There will also be a “[f]lexible sleeping space [that] would also be provided for transgender populations, people with special illnesses or people in recuperative care.”

The shelter beds will be available upon reservation only, and a background check must be passed to ensure there are no wanted felons or sex offenders from entering the facility. They are hoping there will be an average stay of 30 days, with a six month stay maximum.

10 percent of the shelter’s beds will be reserved for referrals from law enforcement agencies. And to make sure this facility is safe there will be unarmed private security guards patrolling the property. The shelter will also have metal detectors, cameras, and outdoor lights to ensure safety.

It is estimate that nearly 15,300 people will experience at least one night of homelessness over the course of this year, according to Orange County Commission to End Homelessness.

Although the 200 bed shelter is only going to help a fraction of the 4,500 people who are homeless in Orange County, but as Karen Stoyanoff, who is a member of Anaheim’s Poverty Task Force and a minister of the Unitarian Universalist Church in Anaheim, said “[The shelter] is a drop in a bucket, but the point is, we’ve got to start somewhere.”

This site uses Akismet to reduce spam. Learn how your comment data is processed.

Stay In The Loop With The Scoop

Stay In The Loop With The Scoop ☕